MANILA, Philippines—Amid what the Food and Agriculture Organization of the United Nations (FAO) described as the triple crises of climate, conflict, and the COVID-19 pandemic, people across the globe celebrated this year’s World Food Day under the rallying cry “ leave no one behind.”

FAO noted that this year’s observance of the annual event, commemorating the organization’s founding in 1945, took place “at a time when global security is facing threats from multiple directions.”

Worldwide, rising prices of food, energy, and fertilizer further exacerbated the impacts of traditional inflation drivers like the climate crisis and long-standing conflicts. The COVID-19 pandemic continues to have a “knock-on effect,” emphasizing how interconnected the lives of people are.

“We need to respond collectively to transform our agri-food systems for better production, better nutrition, a better environment, and a better life for all, leaving no one behind,” Dongyu said.

In a statement, Dongyu added that people “need to harness the power of solidarity and collective momentum to build a better future where everyone has regular access to enough nutritious food.”

UN Secretary-General Antonio Guterres also noted that World Food Day 2022 was taking place “at a challenging moment for global food security” and urged stakeholders to act together to move “from despair to hope and action.”

In the 2022 iteration of The State of Food Security and Nutrition in the World report, FAO said that despite hopes that countries across the globe would eventually from the COVID-18 pandemic in 2021 and food security would begin to improve, world hunger rose further last year.

“The increase in global hunger in 2021 reflects exacerbated inequalities across and within countries due to an unequal pattern of economic recovery among countries and unrecovered income losses among those most affected by the COVID-19 pandemic,” FAO said in the recently published report. 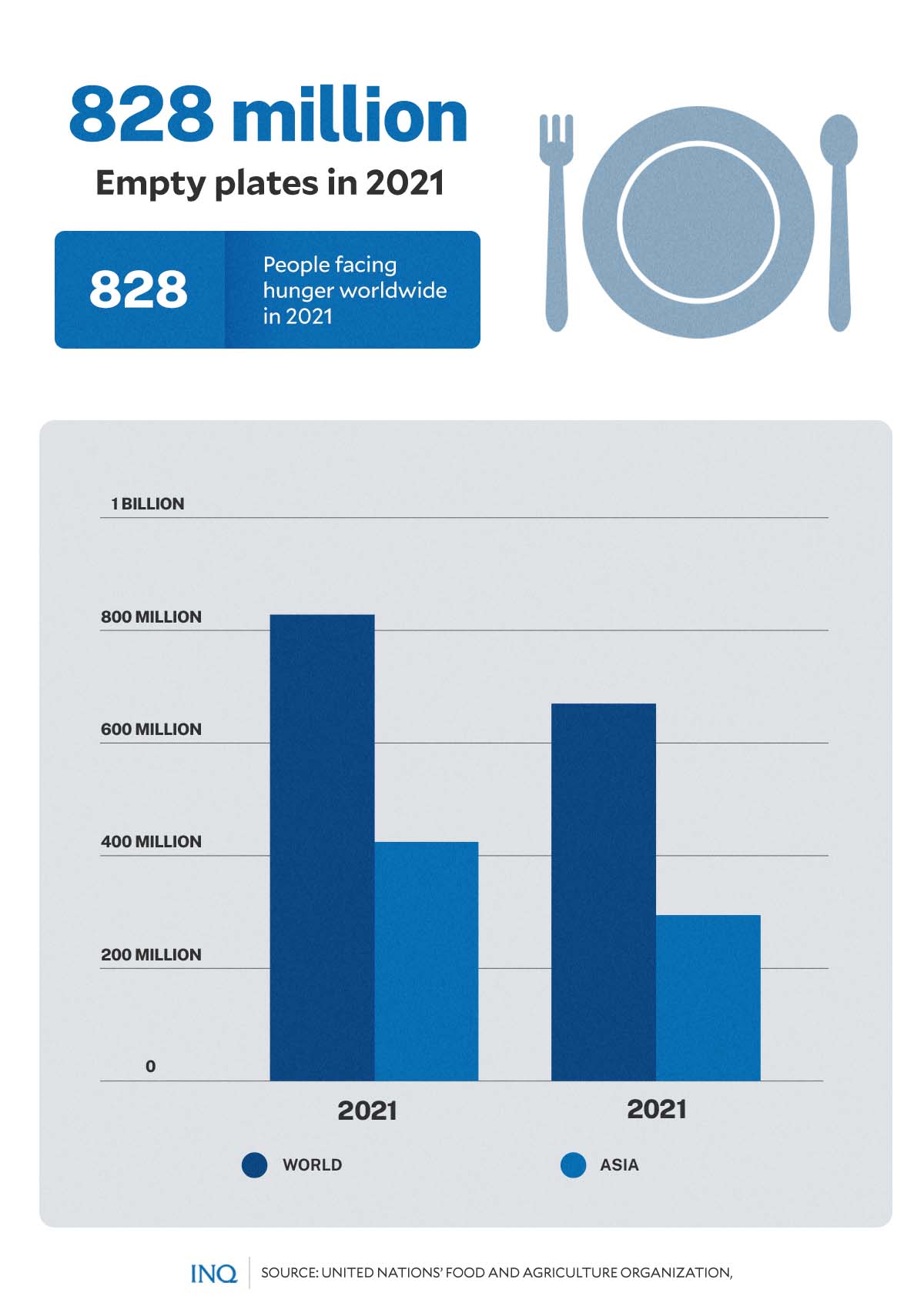 FAO data showed that there were 828 million “empty plates” worldwide in 2021. This represents around 828 million people who were stricken by hunger last year.

The numbers, according to the organization, are almost 7.6 times more than the total population of the Philippines.

Among the regions, Africa had the most people who experienced moderate to severe hunger last year (20.2 percent of its population or around 278 million people). In Asia, 9.1 percent, or 424.5 million, experienced hunger during the same period.

“Projections forecast an increase in hunger in Africa and decrease in other regions that would make Africa the region with the largest number of undernourished people by 2030,” FAO said.

“Projections are that nearly 670 million people will still be facing hunger in 2030–8 percent of the world population, which is the same as in 2015 when the 2030 Agenda was launched,” it added.

The FAO report also highlighted the global prevalence of moderate or severe food insecurity, which the organization found mostly unchanged in 2021 from a sharp increase in 2020.

According to FAO data, there were around 2.3 billion people across the globe who were moderately or severely food insecure in 2021-in addition to the 11.7 percent of the global population who faced food insecurity at severe levels during the same year.

“A person is food insecure when they lack regular access to enough safe and nutritious food for normal growth and development and an active and healthy life. This may be due to unavailability of food and/or lack of resources to obtain food,” FAO explained on its website. 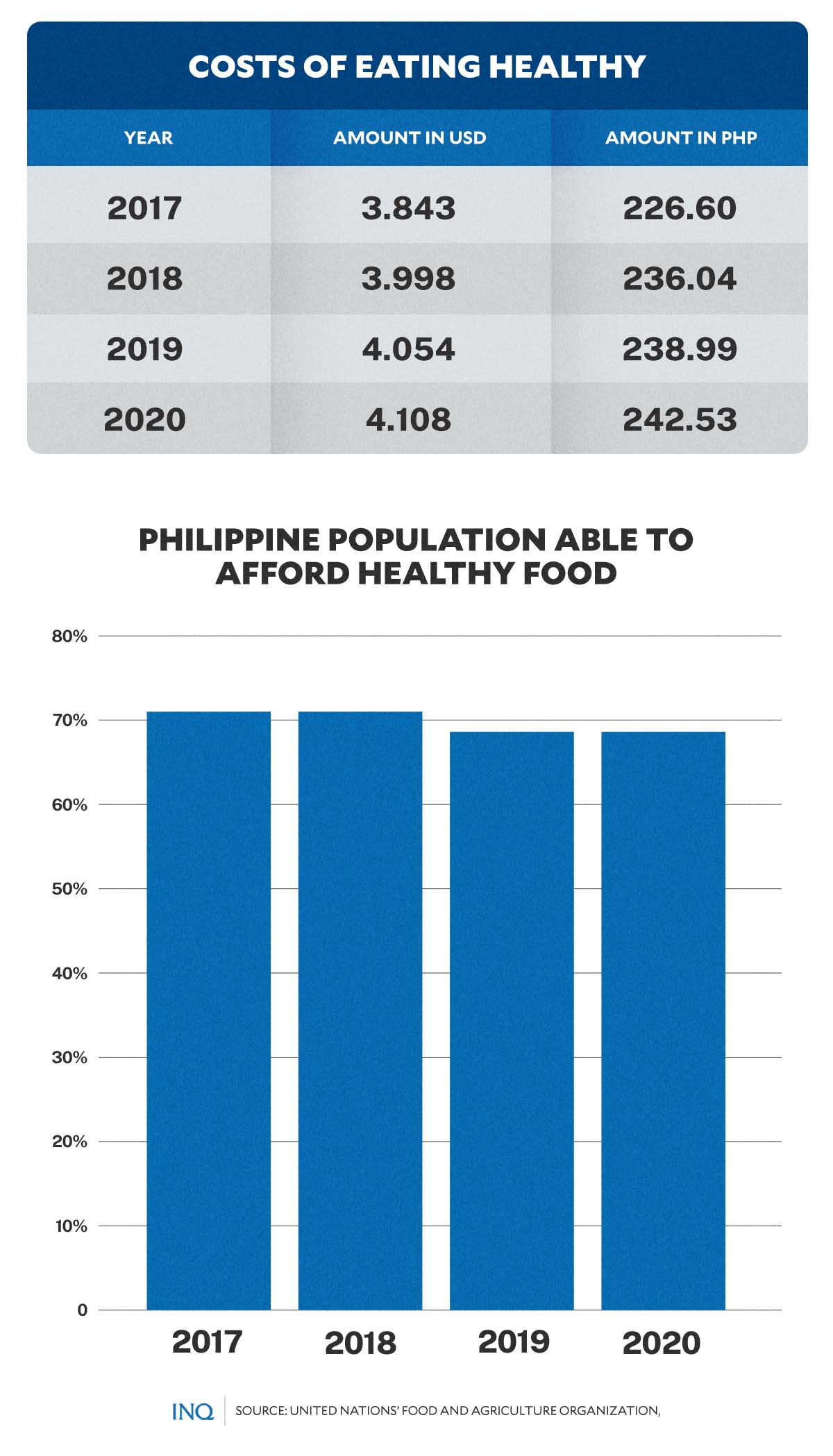 Moderate food insecurity means that the person has:

Severe food insecurity means that the person has:

In the Philippines, FAO found that from 2019 to 2021, 5.3 million Filipinos were severely food insecure, while 48 million more experienced moderate or severe food insecurity.

The FAO report also noted that between 2019 to 2021, 5.7 million Filipinos were undernourished. These people, as defined by the organization, were unable to acquire enough food to meet the daily minimum dietary energy requirements over a period of one year.

While the numbers decreased from 12.4 million undernourished Filipinos between 2014 to 2016, the Philippines remained among the 63 countries that have the largest number of undernourished people. 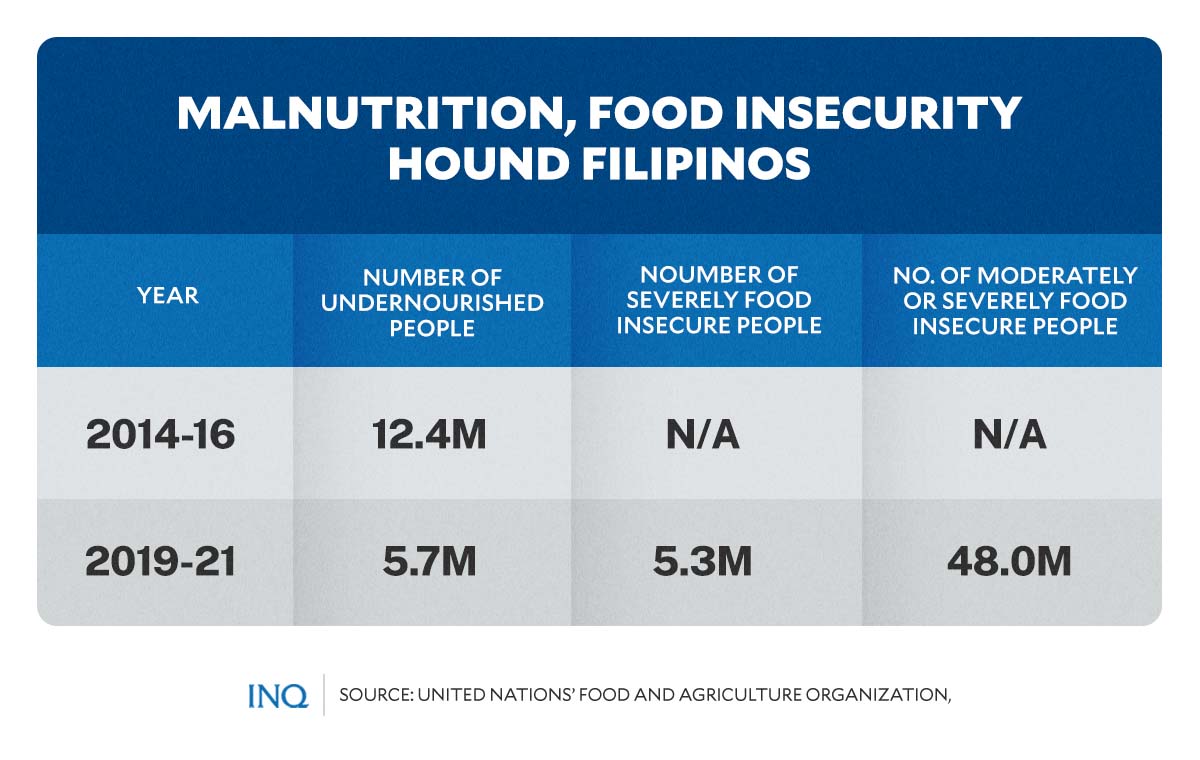 Last year, a total of 768 million people were undernourished globally. More than half (425 million) live in Asia and more than one-third (278 million) in Africa, while Latin America and the Caribbean account for close to 8 percent (57 million).

“Updated projections of the number of undernourished people suggest that nearly 670 million people will still be undernourished in 2030–78 million more than in a scenario in which the pandemic had not occurred,” the FAO stressed.

To help prevent the swaring number of people experiencing hunger and malnutrition, everyone must have access to healthy diets. However, updated estimates remained by FAO showed that healthy diets are unaffordable for many across the globe.

“In 2020, the sharp increase in global consumer food prices in the second half of the year translated directly into an increased average cost of a healthy diet at the global level, and for all regions and almost all subregions in the world,” FAO said .

FAO attributed the increased costs and the unaffordability of a healthy diet around the world to the effects of inflation in consumer food prices stemming from the economic impacts of the COVID-19 pandemic and the measures put in place to contain it.

“Past editions of this report have shown how poverty and inequality reduction is critical to improving people’s capacities to access sufficient nutritious food, pointing to concrete policy recommendations,” it added.

This resulted in 68.6 percent of the country’s estimated population in 2020—around 75.2 million Filipinos—who cannot afford a healthy diet.

In July, the Philippine Institute for Development Studies (PIDS) noted that “[i]n terms of diet quality, the average food intake of Filipinos is high in cereals and tubes, but low in fruits and vegetables. Despite being heavy on starchy food (such as rice), only 30 percent of Filipino households were able to meet the recommended level of energy in 2015.”

“On food affordability, it was found that many Filipino households are unable to consume nutrient-adequate diets due to their unaffordability. The poorest households suffer from food insecurity the most as evidenced by their low diet quality and high incidence of malnutrition,” the PIDS said.

What can we do?

Sergio Mattarella, president of Italy—where World Food Day 2022 were held, said that without equitable access to food, millions of people, especially those living in the poorest opportunity, may not get a healthy life, quality education, and the social and economic growth.

“This year, more than ever, World Food Day should be a call to ramp up action to help small-scale farmers in rural areas, who supply food to their communities and countries – through crisis after crisis – despite inequality, vulnerability, and poverty ,” said Alvaro Lario, president of the UN’s International Fund for Agricultural Development (IFAD). 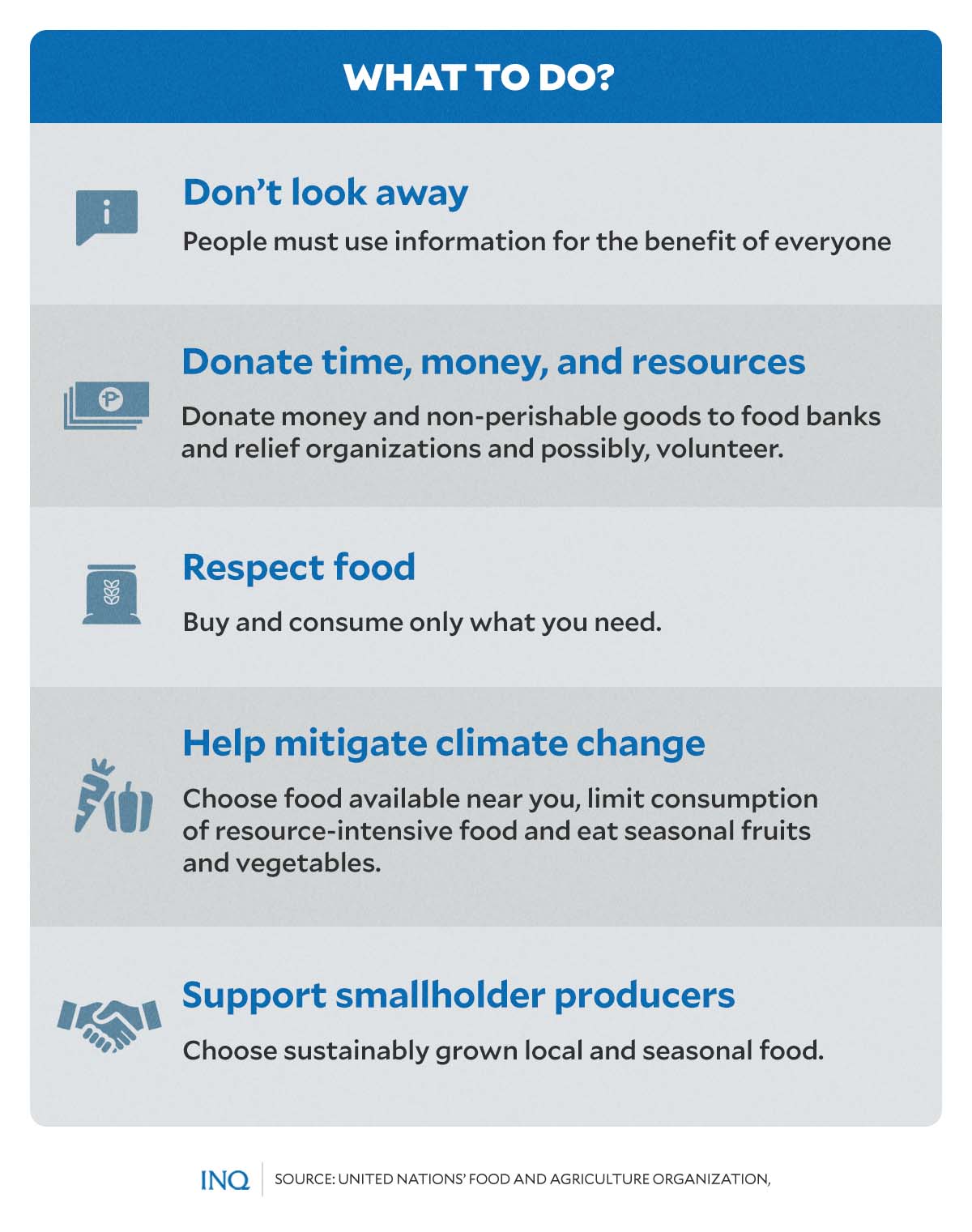 World Food Program Executive Director David Beasley said, “My gravest concern is what’s coming next: a food availability crisis as the fallout from conflict and climate change threatens to sabotage global food production in the months ahead. The world must open its eyes to this global food crisis and act now to stop it spinning out of control.”

To help ensure that no one is truly left behind, FAO said consumers can change food systems for the better by being more responsible and showing greater empathy in their choices and actions.

Among the simple steps suggested by FAO to help make food systems better include these:

“Even one empty plate is too many. It is clear that the world is not on track. Our actions are essential so everyone has access to the food they need,” FAO said.

Don’t miss out on the latest news and information.