Recently, Santa Claus was embroiled in a body shaming controversy following a call to ban ‘fat Santas’ from shopping malls in Australia. With his demand that sticking pillows or other stuffing down the front of the famous red suit end, Australian health researcher Vincent Candrawinata sparked the festive fury.

According to the New South Wales-based doctor, an overweight Father Christmas encourages binge eating and is unhealthy. “Expecting Santa to be fat sends the wrong message,” he told the Herald Sun.

He was also met with criticism, with experts saying he had ‘body shamed’ Santa, and that the issue was in poor taste. But was Santa always a voluptuous happy figure, or has history evolved him that way?

Santa Was Not Always Fat

It’s interesting to note that the fat Santa is actually a pretty modern creation. Santa Claus as we know him today is based on St. Nicholas, the patron saint of children who was born around the year 270.

He began as a monk and rose to become the Bishop of Myra (a town in what is now Turkey), where he distributed his inherited fortune to children by throwing coins and gifts through their windows.

While the signature white beard has long been a part of the uniform, early depictions of St. Nick showed him to be thin, a report by the Week said.

According to the week, Santa became fat not long ago — and Coca-Cola is at partly to blame. st. Nick’s signature red suit, in particular, became an instantly recognizable part of the wardrobe in 1931, when artist Haddon Sundblom depicted Santa as a jovial, rosy-cheeked Coke-drinker for a widely circulated magazine ad, reports say. 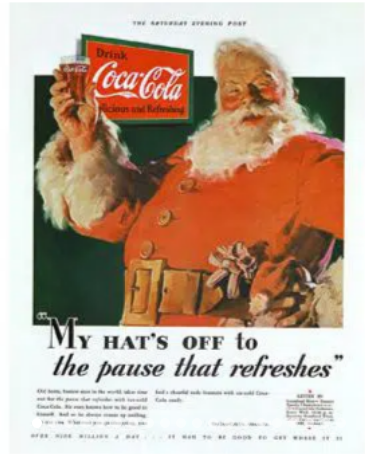 Coca-Cola was attempting to persuade consumers that it was more than just a summer beverage. Sundblom was most likely inspired by the work of cartoonist Thomas Nast, who depicted Santa with a big, warm belly in the 1890s.

Early American writer Washington Irving (The Legend of Sleepy Hollow, Rip Van Winkle) was one of the first to balloon Santa’s waistline: in an 1809 book, he swapped skinny St. Nicholas and his episcopal robes for a fat elf in traditional Dutch garb.

The advertising imagery comes to mind, as one would rather have a happy old soul selling sugary snacks and drinks, instead of a skinny pious guy with a walking stick.

According to the BBC, the 3rd Century Bishop of Myra in Turkey traveled in his red robes, distributing gifts to the poor, especially children. He was apparently very shy, and in order to secretly give money to a family, he dropped coins down the chimney, where they landed in a stocking.

St Nicholas’ story was quickly absorbed into the legend of our ‘Father Christmas,’ who had been around for much longer.

There are numerous stories and legends about pagan winter festivals that include a ‘Father Christmas’ type figure, all of which have been incorporated into the modern version, the report explains.

He most likely represented the arrival of spring, wearing a long green hooded cloak and a wreath of holly, ivy, or mistletoe, and had the power to make people happy during the long winter months.

He was known as King Winter, King Frost, or Father Time in the fifth and sixth centuries. Someone dressed up as King Winter and was welcomed into homes, where he sat near the fire and was given food and drink. People believed that by being nice to King Winter, they would receive something good in return, such as a mild winter.

When the Vikings invaded Britain, they brought their traditions with them. Odin, the Norse God, took on the role of Jul at the end of December. He came to earth, sporting a white beard and a long blue hooded cloak, and rode through the world on his eight-legged horse, bestowing gifts on the good and punishing the bad. Father Christmas, like Odin, appears to travel as if by magic and to be in many places at the same time.

Read all the Latest Explainers here