In new research, Shaopeng Wang and his colleagues at Arizona State University’s Biodesign Center for Bioelectronics and Biosensors describe a method capable of keenly imaging the behavior of small molecules that have often eluded conventional biosensing technologies.

Shaopeng Wang is a researcher at the Biodesign Center for Bioelectronics and Biosensors and an associate professor in the School of Biological and Health Systems Engineering at ASU.
Download Full Image

The research will help investigators better understand the subtle interplay of biomolecules — essential information for improving the detection of a range of diseases as well as for the design of more effective drugs.

The research appears in the current issue of the journal ACS Sensors, which has been selected by the journal as an editor’s choice, a recognition highlighting only the top papers published across the ACS portfolio.

The new technique is a variation on surface plasmon resonance (SPR) detection. SPR is an optical phenomenon, useful for measuring the binding of molecules in real time without conventional use of fluorescent labels, which can interfere with the molecular activities under study. SPR has been used to quantitatively measure the binding between two proteins, a protein and an antibody, DNA and a protein, and many other biological interactions.

One of the most attractive features of SPR is its ability not only to detect specific binding events but to accurately sense the dynamic changes that occur during molecular bindings and disassociations. SPR devices accomplish this by detecting subtle changes in the refractive index of light.

A sensor chip consisting of a glass slide coated with a thin gold film is used for detection. Molecular probes known as ligands are affixed to the surface of the sensor slide, and fluid containing the biomolecules to be detected (analytes) flow across this surface.

As a light source passes through a prism, it reflects off the underside of the sensor chip surface and into a detector. At a certain incident angle known as the resonance angle, light is absorbed by the electrons in the metal film of the sensor chip, causing them to resonate. These resonating electrons, known as surface plasmons, are sensitive to their surrounding environment, providing information about binding activities at the sensor surface. 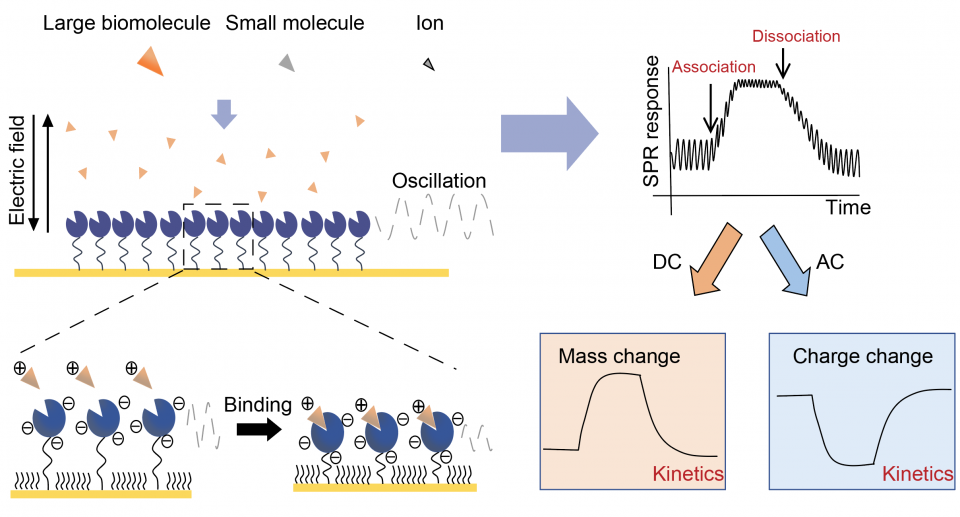 An oscillating biolayer (OBL) is fabricated on a gold film, seen in this zoom-in image. Diagram left side: The OBL consists of a protein receptor layer connected to the surface via a flexible polymer cushion. The receptors are charged in solution, thus can oscillate with the applied electric field. Binding of ligand to the receptor alters the size, charge and conformation of the receptor, and hence the oscillation. Diagram right side: The binding and dissociation of the ligands lead to mass and charge change to the OBL. The DC and AC component of the OBL signal are separated, which arise from the surface reflectivity (mass) change and oscillation amplitude (charge) change, respectively.

This expansion of SPR detection sensitivity has many possible applications, particularly for investigating small-molecule drugs, which make up over half the drugs approved each year by the FDA.

While most such detection relies on changes in mass occurring at the sensor surface during a molecular binding event, traditional methods struggle to detect these mass alterations when the molecules are too tiny.

To overcome this limitation, the new technique affixes the detecting ligands to the sensor surface in a unique way. Instead of attaching them statically, as with conventional SPR, these ligands are embedded in a monolayer of protein with flexible linkers known as a biolayer at the sensor surface. The ligand-bearing biolayer is able to oscillate when an alternating electric field is applied.

Changes in the oscillations of the biolayer during binding and disassociation events provide additional information on charge and conformation, in addition to mass changes, brilliant very precise detection even in the case of extremely small analyte molecules.