Like an incisive through-ball through a stubborn defense, MAN v FAT has proven to be decisive in helping men lose weight in an inclusive environment, tackling the worry of taking to the scales through the simple wonders of a kick-about.

Mike Wallbank, turning out for Bolton MAN v FAT on the day, has lost 35% of his body weight since joining the programme, but achieving a healthy BMI has been the icing on a well-deserved cake. The camaraderie of joining a team means the mental health benefits can be just as big.

“The process is amazing, it’s been life-changing really,” he tells us. “I wouldn’t have said I was an unhappy person before. but since doing MAN v FAT I know I’m a happier person. I put myself out there more. I’ve been made captain and done the Manchester half marathon which is a real achievement.”

The concept of MAN v FAT is pretty straightforward, with players joining teams of guys to lose some timber by playing weekly matches, officiated by qualified referees. Players don’t have to come as part of a group and can just join alone, which helps with the difficulty of men creating and friendships.

Often, just getting moving is the kick-start to a whole host of physical and mental health benefits, and the fact that games are decided by weight loss, as well as goals scored, removes some of the pressure of having to perform, making the whole thing a lot more fun.

Having a peer support network is proven to be beneficial when losing weight, and the backing of a football team helps MAN v FAT players resist reaching for the tub of Roses, especially at Christmas time, with football easing the isolation of trying to lose weight, which can often feel like a solitary battle.

MAN v FAT players get access to The Dugout, an exclusive members’ area, allowing them to track their progress and access various matter-of-fact resources that help guys carry a bit of heft, from healthy eating recipes to sexual health and wellbeing advice .

MAN v FAT are kindly offering Football365 readers a discount on new memberships – simply add the promo code F365 to see the cost reduced from £9.99 to £3.65.

READ MORE: Everything you need to know about MAN v FAT, the unique way for men to lose weight

A lot has been said about weight loss ‘journeys’, but having a knock-around with your mates in 28-minute games can make shifting a few pounds a lot more manageable and a lot less daunting.

In fact, the total weight loss mountain by MAN v FAT players is 487,574.74 lbs, the equivalent to two blue whales or four Jan Molbys in his prime!

Sorry Mr. Molby, but MAN v FAT is all about camaraderie, having a laugh, and the team names sum up the gallows humor of players making real-life decisions about their weight loss.

Teams taking to the pitch at the Man City training base on Finals Day 2022 included the Walsall Waddlers, Newpork Bounty, Make Emile Of It, The Dartford Chunks and the Show Bloaters, while the fantastically monikered Kebaberdeen were there to show they were ready to shave a slice out of their waistlines.

In total, 104 MAN v FAT teams from around the UK had fought it out to get to Finals Day, with 43 weight loss outfits making it to the business end in Manchester.

Regional qualifiers were held in Scarborough, Slough, Dorchester and Ilkeston, highlighting the national reach of MAN v FAT, as hardly a county is without a team looking to kick a bit of belly bulk into touch.

There was, admittedly, a little more stretch in the thermals as the teams took to the chilly pitches at the Etihad Campus, but things soon heated up with the teams whittled down to 16 after a busy morning. 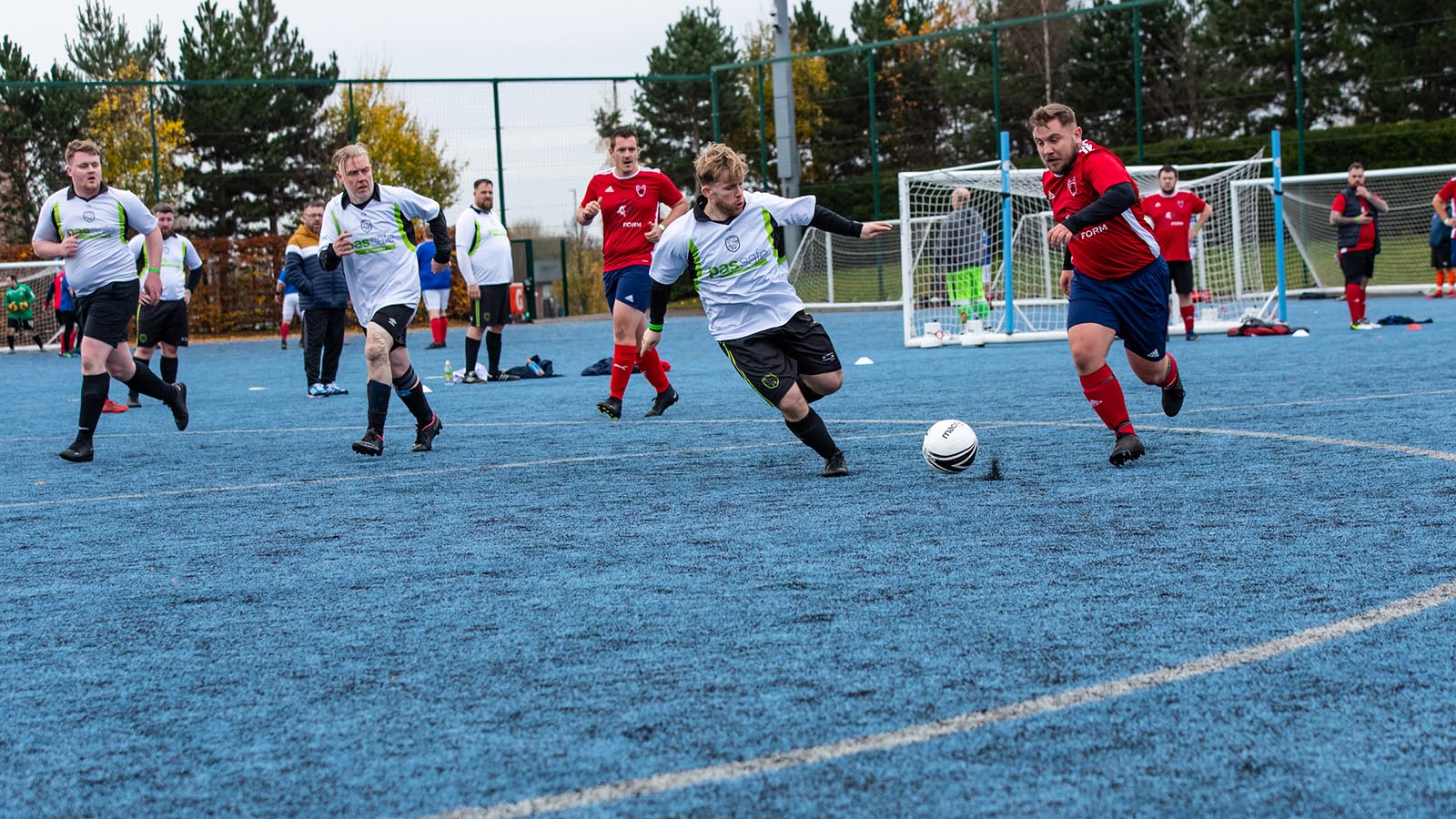 Wales has had a grip on the tournament in recent years with Newport’s Conquered All The Chippys wrapping up the win last time around, and there was a South Wales derby in the semi-final this year as Swansea Orange took on another Newport team in Newport Bounty .

It was the Swans leaving the Newport Bounty coco-nutty by knocking them out to reach a final showdown with Norfolk N Chance.

The East Anglian team from Alan Partridge country had told Milwall to “smell my cheese” in their own semi, setting up a mouthwatering final vs Swansea Orange who may or may not be sponsored by Terry’s Chocolate Orange. (They aren’t, but Chocolate Oranges are available at Rawlinsons).

As the dark set in, Swansea showed that technique on the ball comes in all shapes and sizes and they saw off Norfolk N Chance 5-1 for a well-deserved victory, which delivered the trophy go back to Wales once more.

Swansea coach Ben Gleeson was rightly proud of his lads, saying: “This team have achieved something truly special here. They became the pride of our league for a weekend and will be so for much longer than that!”

Roughly 15 months ago we began with nothing but a wonderful venue and a group of 20 strangers. MAN v FAT was an alien concept to the Swansea area. 110 active members later, over a tonne (literally 1,000kgs+) of weight lost, so many lives changed & saved, and now we’re National Champions. Our rapid growth from nothing to something has been incredible, and we’re not done yet. This league, this family of brothers, is unstoppable.”

“These guys really are a special bunch. We’ve created a league that goes way beyond football and weight loss. We’ve genuinely cultivated a safe haven for men’s mental health and it’s all thanks to how open, honest and vulnerable our members allow themselves to be.” 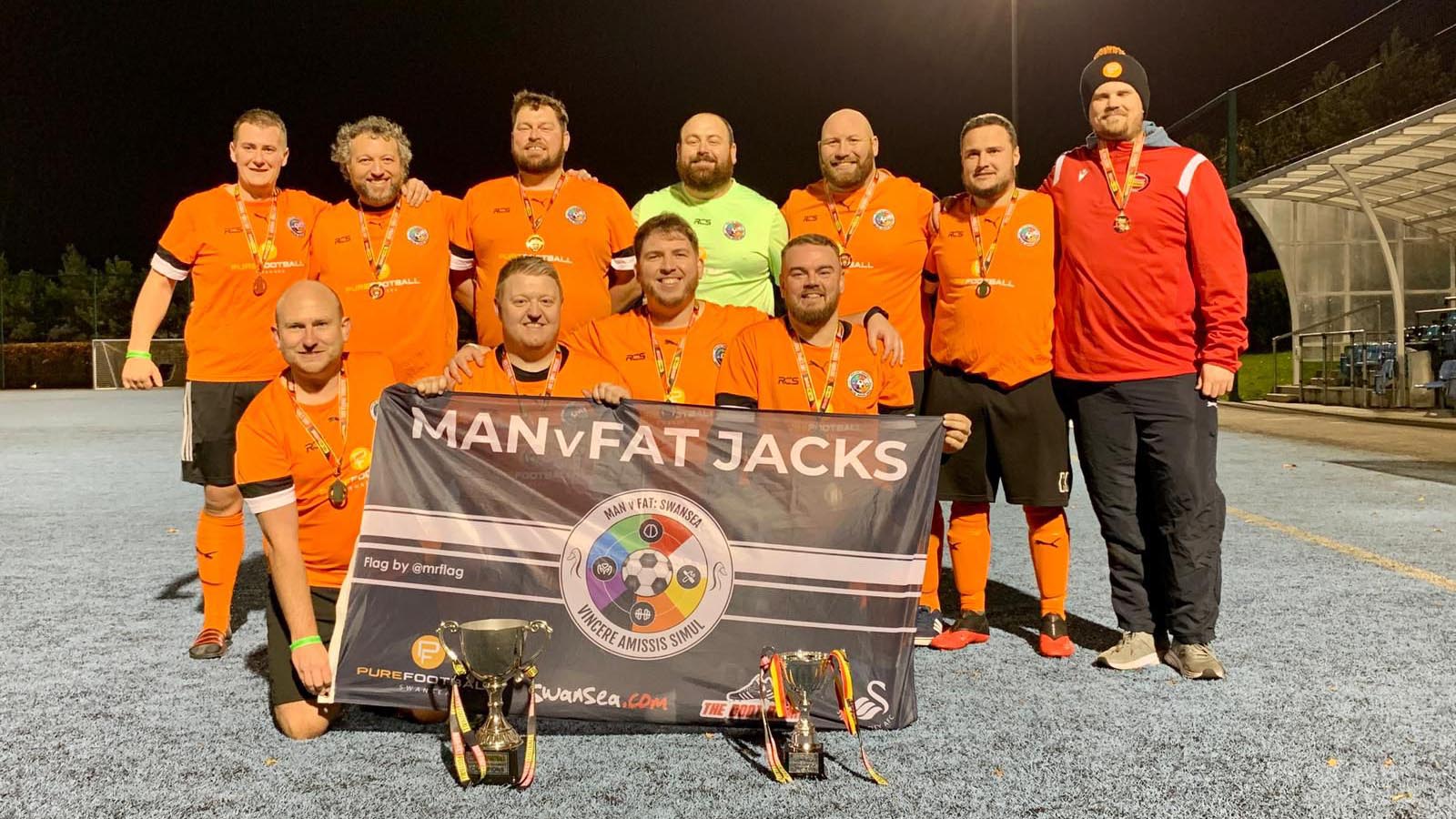 Victorious Swansea Orange player Benji Donward also spoke volumes about the value of MAN v FAT to himself and his team-mates. Benji lost five and a half stones, which is equivalent to 25% of his body weight.

“We all say to each other as much as it’s a weight loss club, a lot of people underestimate how much it is a mental health and support club.

“As you get older, you stop going out as much, some of your mates, they get married, have kids and you don’t have time to see each other, your schedules don’t match sometimes.

“We’ve gone up to 10 teams now, that’s 110 players and we’ve got a WhatsApp group with that many people in it where you can chuck a message in there, if you need a bit of mental health support, if you need someone to pop out and do something.”

Benji didn’t talk down the footballing achievement of winning the tournament though.

“We’ve always known we’ve got some quality footballers. We are still carrying a bit of weight, but after the opening game v Portsmouth we didn’t concede another goal until the final.”

Get 22 men on a pitch and there will always be healthy competition, but the beauty of MAN v FAT is that the joy of football takes over and weight loss is a welcome by-product.

Swansea Orange showed they had the skills to match the finesse on the scales and MAN v FAT will be back next year for another heartwarming battle of guts and glory.

(No Chocolate Oranges were harmed in the making of this article.)

Inspired by the stories of this years MAN v FAT winners? It could be you! There’s a MAN v FAT Football league less than 30 minutes from almost every man in the country and Football365 readers can get a discount on new memberships – add the promo code F365 to see the cost reduced from £9.99 to £3.65.