No doubt, protein is a good thing. It’s the building block of our muscles, bones, and other tissues, and getting enough of the nutrient essential for health.

Word seems to have gotten around the many benefits of protein. According to Nielsen, 83 percent of Americans consider protein to be an important part of their diet for overall health, and over half intentionally seek out high-protein foods. (The report also points out that many people aren’t clear on which foods are a good source of protein, but that’s another issue.)

Although it’s certainly possible to get enough protein from food sources like meat, fish, eggs, and soy, many people choose to add more protein throughout the day with supplements like protein shakes and bars. The US market for protein supplements was around $8.4 billion in 2021 and is projected to grow about eight percent each year, according to Grand View Research.

But is it possible to get too much of a good thing? The answer, of course, is yes. Too much of anything can be harmful—even drinking too much water can be fatal (although that’s an extreme situation that you probably shouldn’t worry about).

Whether you’re loading up on protein as part of a strength-building routine, a low-carb diet (gotta get those calories from somewhere!), or just because you really love beef and want to eat it at every meal, it’s important that you don’t overdo it.

Here’s what to know about how much protein is too much, and what you should keep in mind when you’re upping your intake.

How much protein do you need?

When it comes to how much protein men need, the recommendations are a little bit scattered. The Dietary Guidelines for Americans recommend that the average person get between 10 and 35 percent of their total calories from protein. If you eat 2,500 calories per day, that’s between 250 and 875 calories from protein, or between 63 and 219 grams per day—a massive range. By weight, the minimum recommended amount is 0.8 grams per kilogram of bodyweight; for a 185-pound man, that’s just 67 grams per day.

Where you might fall in that range depends on your goals and your activity level. “Exercise increases your need for protein intake to support muscle protein synthesis,” says Tabitha B. Nicholas, registered dietitian based in Lake Charles, Louisiana. So, anyone who exercises regularly and wants to build muscle should aim for the upper end of that range.

How much protein is too much?

“Yes, there is such a thing as too much protein,” Nicholas says. “The general consensus is that two grams per kilogram of body weight is the upper limit for most adult males.” So, if you weigh 185 pounds, you shouldn’t be eating more than 168 grams of protein per day.

What happens if you eat too much protein?

Getting that much protein would be unpleasant and tough for most people. You’d have to eat 20 ounces of grilled chicken breast a day to get to 168 grams, or about seven scoops of a standard whey protein powder. 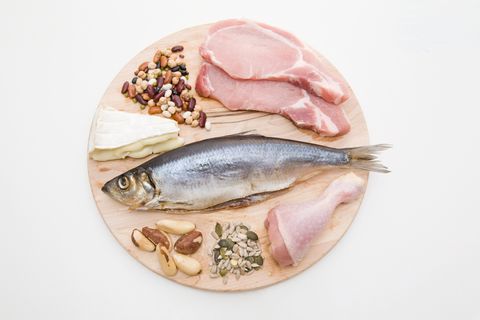 If you’re currently getting more than the recommended maximum, Nicholas says that you’re at a higher risk of kidney stones, which are painful. The good news is that, contrary to what you may have heard too much protein is unlikely to damage healthy kidneys, according to existing research. But if you already have kidney disease, excessive protein intake can be existing damage.

“Too much protein in the form of processed or red meats may also increase your risk of certain cancers,” Nicholas says. “And don’t forget that excess protein, if not burned, can be stored as fat which may lead to weight gain.”

Another potential side effect of eating too much protein a lack of fiber (an indigestible compound found in plants), which could happen if you’re eating so much protein that you don’t eat enough whole-food carbohydrates like fruits, vegetables, whole grains, and legumes.

The Dietary Guidelines for Americans recommend about 38 grams of fiber per day for men, in order to aid digestion and prevent diarrhea and constipation, as well as to improve overall gut health and lower your risk of chronic conditions like type 2 diabetes and heart disease.

Unless you’re going really hard on protein, you probably don’t have to worry.

The potential negative side effects of protein likely only happen if you’re eating too much protein regularly and for an extended period of time. Going over the recommended daily amount every once in a while isn’t something to worry about.

If you’re eating a balance of protein, carbs, and fat at every meal, you’re likely getting the protein (and other macronutrients) that you need.

Christine Byrne, MPH, RD, LDN, is a registered dietitian and the owner of Christine Byrne Nutrition, a private practice serving clients in Raleigh, NC, and virtually across the country. She specializes in eating disorders and disordered eating, and takes a weight-inclusive approach to health. A longtime journalist, she has worked as a food editor at BuzzFeed and Self, and her writing has appeared in dozens of national media outlets, including Outside, HuffPost, EatingWell, Food Network, Glamor, Bon Appetit, Health, and more.