It isn’t easy being Jewish — or fat. On one hand, Jewish culture is highly food-centric. On the other, it has bought into the modern, Western, white model of slimness and diet culture. To top it off, festive Shabbat kiddush Toasts and holiday tables are laden with scrumptious, high-caloric dishes — all consumed under the watchful eyes of judging friends and family.

“Fatness comes between us and our celebrations and traditions, when in fact Jewish traditions can be liberating to all bodies,” said Rabbi Minna Bromberg, the founder of Fat Torah.

How welcome would you feel if you didn’t fit into synagogue seats? If towels and robes at the mikveh (ritual bath) were too small to cover your body? If the swag at Jewish youth group conventions was not offered in your size? If the Jewish organization you worked for established a dieting group for employees and kept tabs on who joined — or not?

A longtime fat activist, Bromberg founded Fat Torah to fight weight stigma, fatphobia, and fat shaming in Jewish community settings. To do so, she turns to Jewish texts, traditions, and spirituality to promote body liberation for people of all sizes.

Jewish communities have made great strides in recent years toward full accessibility and inclusion. Much has been done to welcome and make comfortable people with physical or developmental challenges. Progress has been made in the areas of gender equity, LGBTQ+ issues, and recognition of Jews of color and non-Ashkenormative backgrounds.

But, according to Bromberg, there is one group that has been left out: fat people.

Bromberg, 48, proudly uses the term “fat,” rather than euphemisms like “big-boned” or “fluffy.”

“Fat is a morally neutral descriptor of my body. I am reclaiming it from being a slur. People can choose what word they want to use to describe themselves, but I think fat is better than alternatives that are medicalized and related to disease, such as ‘overweight’ and ‘obese,’” she said.

In speaking with The Times of Israel from her home in Jerusalem, Bromberg emphasized that people’s body size is determined by many factors and that fatness is not necessarily linked to ill health. How someone looks is no one else’s business, and people should be judged by their character, not their size. Leaving the house in a big body should not have to be a radical act. 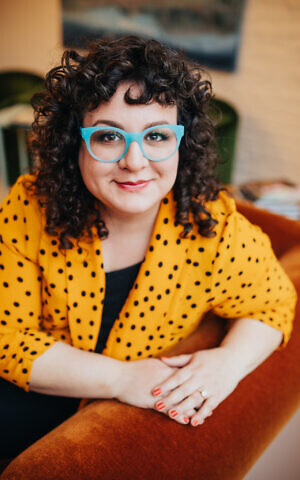 “It is painful when people denigrate fat bodies in public. Kids can hear these judgments made on bodies, and it can lead them to eating disorders down the line,” she said.

Bromberg launched Fat Torah right before the COVID pandemic began. Its activities were forced courses online for a couple offering, with Bromberg, consultations, and mentoring of Jewish community professionals over Zoom. Hundreds from North America, Israel, Europe, and the United Kingdom joined the organization’s Facebook group to share experiences, information, and support.

After doing some initial pro bono fundraising for Fat Torah, Washington, DC-based Emily Goodstein, 39, came on as founding board president in early 2022. The goal of Goodstein and the board’s other 13 members is to fundraise and strategize toward expanding the organization’s staff and resources.

Goodstein, who runs a digital marketing agency specializing in non-profits, said she wants to help end the multi-generational trauma of fat shaming.

“This is the time to do it. This not accepting our bodies goes back to our great-grandmothers. Women in our community have been told implicitly and explicitly that their bodies have to look a certain way, that their bodies are wrong and they have to fix them,” Goodstein said. 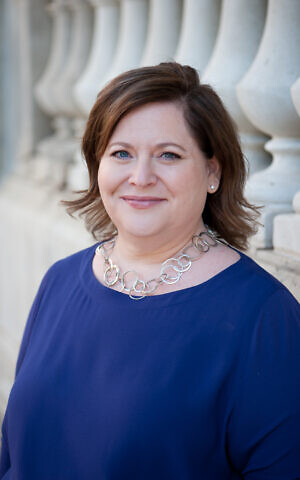 “It is time for Jewish communities to welcome fat people and make sure that their bodies fit in the spaces we design,” she said recalling an instance when she came away from a Jewish event with bruises on her hips from squeezing into an undersized chair.

Board member Sara Shapiro-Plevan, 50, lives in New York and is CEO and founder of the Gender Equity in Hiring Project. She joined the Fat Torah board “to be a champion and amplifier for others’ stories about their fat liberation… but also to bring people in closer touch with how embodied Judaism has been taken away from fat people in many ways.”

Shapiro-Plevan recounted how she was put into situations where she felt ashamed and vulnerable when none of the towels or robes provided at mikvehs fit her body. It was made worse by the fact that her purpose for visiting the mikveh was to honor her body according to Jewish tradition.

“I have since joined my community mikveh As a guide, and I have changed this by introducing twin sheets to people immersing, which enables every body to show up and be present… No one should ever consider not taking part in a Jewish ritual because the equipment doesn’t ‘fit’ their body,” she said. 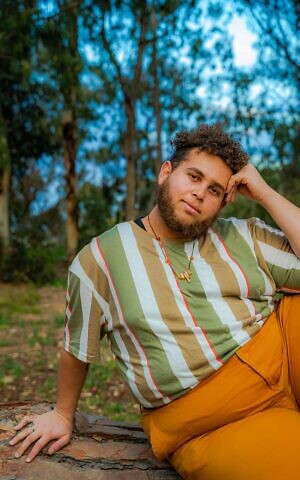 Jordan Daniels, 27, told The Times of Israel that he joined the Fat Torah board to ensure there was diverse representation. Daniels, who lives in San Diego and works for a grant-making organization, identifies as a queer cisgender male who presents with female fashion. He is also a Jew of color and the grandchild of Holocaust survivors.

“We are talking about people using the Jewish context to discriminate, which is not acceptable. Women bear more of the brunt of it socially, but these challenges don’t just affect women. They affect all genders. And they don’t just affect Ashkenazi Jews,” Daniels said.

“My fatness is ostracized, and I want to turn to my Judaism and spirituality as ways to deal with fatphobia,” he said.

Rabbi Louis Polisson, spiritual leader of Congregation Or Atid in Wayland, Massachusetts, near Boston, first learned of Fat Torah through his wife. He views the issue as part and parcel of justice, equity, and human rights. The creation of all people b’tzelem Elohim (in God’s image) applies to fat individuals as much as thin ones.

My fatness is ostracized, and I want to turn to my Judaism and spirituality as ways to deal with fatphobia

Polisson, 32, has been gently laying the groundwork for limiting body talk (“You lost weight,” “You look good”) at his synagogue, especially since he has perceived anxiety among congregants about weight gain during the pandemic. He hasn’t yet used the term “fat liberation,” but he speaks regularly about inclusion, equity, and justice in his weekly Shabbat emails and sermons. 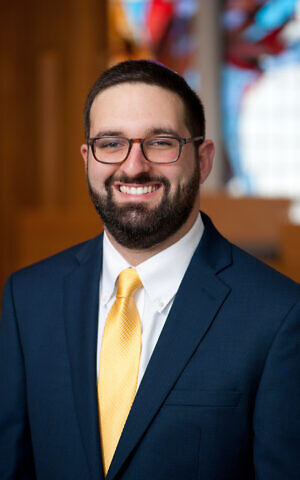 Polisson told The Times of Israel he would like to invite Fat Torah’s Bromberg to do an online workshop with his congregation, but he feels the time isn’t right yet.

“I floated it with a lay leader I work a lot with, but they were concerned that the idea would be too much of a culture shock. The congregation has a lot of members who work in science and medicine, professional fields that are critically important and have done so much good, yet are steeped in the mindset of diet culture,” he said.

Young rabbis in training are likewise becoming aware of biases held in the Jewish community against fat people. This includes how they look at themselves and others. Some have turned to Fat Torah for help in preparing for their professional roles.

“Rabbis are imbued with authority. Therefore, we need to be publicly reflective on fat discrimination. We need to model showing respect to all, and recognize anti-fat bias when it is happening,” said Hebrew Union College (HUC) rabbinical student Hannah Pomerantz.

Pomerantz, 25, and fellow rabbinical student Ally Karpel, 26, invited Bromberg to lead Jewish text-centric Purim and Passover Fat Torah workshops at HUC’s Jerusalem campus during the 2021-2022 academic year. These sessions were valuable in showing the students how they can frame liberatory concepts and texts from the pulpit. 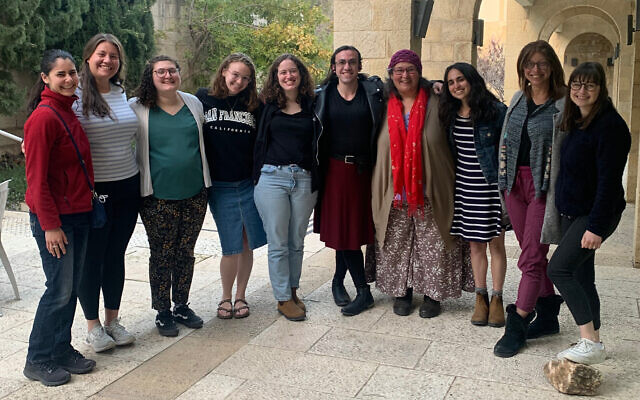 Karpel said she was particularly struck by the notion of “moral injury,” or injury to the soul, that can occur when supposedly safe, sacred Jewish spaces are not kept free from fatphobia and weight stigmas.

Karpel said she plans to push back on those who coopt Jewish food rituals and religious restrictions with diet language.

“I’ve heard people talk about how Passover matzo is slimming, and how observing Jewish fast days is a way to lose weight,” she said. 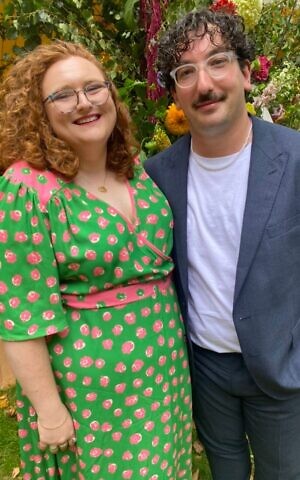 Some shared with Joseph Hyman, communities and special events programmer at London’s JW3 Jewish community center, that during the pandemic they were struggling with their weight at home. Others conversely felt liberated from community, family, and cultural scrutiny of their weight and eating habits. Hyman identified the need for a conversation on this, so he organized a JW3-sponsored online public event co-moderated by Fat Torah’s Bromberg. Eighty-five people attended.

“People felt comfortable and seen,” said Hyman, who launched “Full Fat,” a JW3 micro-community program. The group meets bimonthly, focusing on socializing and self-acceptance. Fat activist Lucy Cohen, 30, leads the events, which include Jewish text learning and movement, and have been attended equally by men and women of all ages.

“I was fortunate to grow up being told that I am more than my body and that my size does not dictate my worth,” said Cohen, who is a belly dancer and a burlesque performer.

“There is nothing like burlesque to make you feel good about your body,” Cohen remarked.

She, however, realizes that as liberating as Full Fat can be, the group’s members are not yet where she is in terms of body acceptance.

“For some, it is their first taste of being told they are okay just the way they are,” she said. 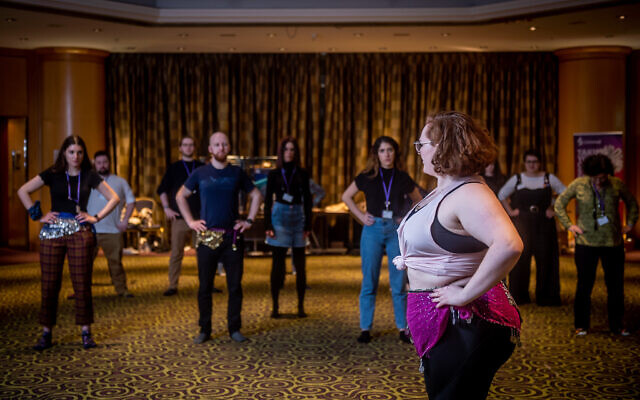